Written by Pam Turley on March 29, 2017. Posted in Uncategorized.

Congratulations to the following UCET Award winners announced during the opening session of the #UCET17 on Thursday, March 16, 2017, at the University of Utah.

Rick is the Educational Technology Specialist at USBE, and has worked for decades at the state and national level. His reputation is impeccable.  He knows and is well respected by key national and state leaders.  He truly loves teaching an learning.  And to top it off, his personality is easygoing and fun.
For the past several years, Rick leveraged his knowledge and was essential to the conception, crafting and documentation with districts to bring about the state Digital Teaching and Learning master plan.
Rick has served on the board of SETDA (State Educational Tech Directors Association) including a stint as the board chair where he interacted with national leaders promoting best practices of technology integration.

Cody Spendlove is the Ed Tech Curriculum Director in Alpine. He is the essence of leadership excellence. He is a champion of Alpine’s teachers. He knows how to get folks in the boat and pulling the oars in the same direction. Working in Alpine District, Cody also benefits the state, He knows how to communicate about the role of public education and the value of ed tech.  One of the best things about Cody is that he is always willing to take time to talk and think through the tough ed tech issues Utah is facing at the district, region and state levels.
Cody earned his CETL (Certified Educational Technology Leader) three years ago. It’s a national certification. The past two years he’s been mentoring other Utah ed tech leaders and helping run the Utah CETL cohorts program where others are earning their national certification. He also helps conduct National CETL trainings.

Ben kindled a passion for Computer Science at Rowland Hall after completing his masters in Instructional Design and Education Technology at the University of Utah. Several years ago, the CS offerings were limited and disconnected and Ben saw the opportunity in working with stakeholders throughout the school to begin to formulate a schoolwide CS curriculum.
Ben was instrumental in forming a Computer Science track including AP courses and a Joy of Computing course. He has also developed an Arduino for Middle School course in which students explore the Internet of Things by creating projects using Arduino microcontrollers. This curriculum has been so successful, Ben has presented it in regional conferences over the last several years.
Ben was also integral to securing grant funding for a redesigned learning space which became the Middle and High School Makerspaces. Through Ben’s guidance, the space became a fruitful laboratory for design, creation, and innovation.

Ashley Lennox is an outstanding young educator who combines creativity, technology use, classroom management, and superior teaching skills to create a classroom where all students learn and achieve. Don’t let her easy-going nature fool you — she is a skilled educator who knows how to reach each individual student. Ashley is first in line to write grants, implement new technology, and combine the tools she receives to improve her pedagogy and focus on educational priorities. For example, right now in her classroom Ashley has a Chromebook lab, iPads, an iPod Touch lab, a Sphero lab, and Makey Makey kits. Unlike in some classrooms, these tools don’t just sit. Ashley uses these resources masterfully to engage her students in the curriculum in new ways and push beyond the traditional walls of the classroom. She also happens to have exercise balls for chairs, an iguana, a chameleon, a turtle, and an altogether interactive classroom and teaching style that encourages students to think, problem solve, and create. When entering her classroom, what becomes instantly obvious is the passion Ashley has for teaching and learning and the love she has for her students. She motivates, encourages, and inspires.

Congratulations to the #UCET17 Awards Nominees

The following educators who have been nominated for the 2017 UCET Awards. Winners will be announced Thursday, March 16, 2017 at the opening session of the #UCET17 Conference at the University of Utah. Do you know an outstanding educator or school leader who deserves recognition? Nominations for all UCET awards are open from now until Friday, February 10, 2017.  Award winners will be announced Thursday, March 16, 2017, at the opening session of #UCET17.

Submission Form for all awards

UCET Outstanding Teacher of the Year – This award recognizes and honors a teacher who has demonstrated outstanding achievement and leadership in implementing technology to improve education. (PK-12 classroom teacher). $500 cash and plaque.

UCET Outstanding Leader of the Year – This award recognizes and honors a leader who has demonstrated outstanding achievement and leadership in implementing technology to improve education. The nominee can be a principal, superintendent, school or district technology staff, regional technology trainer, etc. The one stipulation is that the nominee is not a PK-12 classroom teacher. They may have a teaching certificate, however their current position is not as a classroom teacher. $500 cash and plaque.

UCET Outstanding Young Educator of the Year – This award will be presented to an outstanding young educator (under the age of 35) who demonstrates vision, innovation, action, and transformation using technology to improve teaching and learning. $250 cash and plaque.

Written by Pam Turley on December 3, 2016. Posted in Uncategorized. 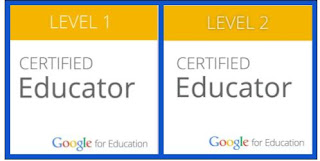 Prove your expertise as a Google for Education user in the classroom!  Each certification includes an online training course, practice reviews, and a 180-minute certification test. The certifications can be used on blogs, websites, social media profiles, email signatures, and professional resumes.  I just completed the Level 1 Certification and it was an excellent learning experience to brush up on gmail, Google Drive, Slides, Sheets, Forms, Groups, Hangouts, Classroom, and the new Google Sites.