Tricia Jackson has worked for Park City School District since 2005. In July 2013 she moved from Education Technology Specialist to Online Learning Administrator. She has been a member of the Utah Coalition for Educational Technology (UCET) Board since 2008; becoming Past President in 2015. She obtained her bachelor’s degree in Information Systems and Spanish at Utah State University. Lesley University awarded her a Master of Technology in Education in the spring of 2011. Over the last few years, Tricia worked on the Awards, Grants, Program, Conference Credit, and Registration committees for UCET. This work includes: streamlining communication methods, implementing folder structures and naming conventions, using Add-ons in Google Spreadsheets to review and process member submissions to reduce paperwork, continuing refinement of the program creation process via Sched, creating participant and vendor registration forms via BlackPlum, and updating various ucet.org webpages. She was also instrumental in bringing Jay McFarland and Vicki Davis to UCET 2015 as Keynote Speakers. Tricia enjoyed presenting on time management at SUECON 2015 (http://ucet.org/back-to-suecon-2015-thoughts/).

The UCET board is excited to announce the theme of the 2015 UCET Conference: UCET Tech Elevated

Will you be attending the UCET conference this year? Let the world know! Take a photo of yourself in well-known Utah locations showing off your “elevated” tech, then post your photo on your favorite social media sites with the hashtag: #techelevated. 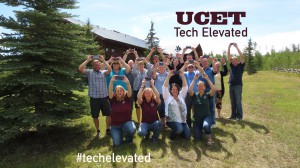 The people who post the best and most popular photos will win complementary UCET registration! One winner will be selected each month from now until UCET. So start posting!

Pinterest – Want your photo to win? Be sure to include #techelevated in your pin. Then get as many people as possible to repin your photo.

Herriman High School opened its doors in the fall of 2010 to students from the southwestern end of the Salt Lake Valley. The school is a beautiful two-level facility, situated on a 50-acre campus, with views of the Salt Lake Valley and mountain ranges to the east and west. Since its opening, students have been laying a foundation for academic excellence, diversified clubs, athletic achievements, and rich traditions. They strive for an atmosphere of equality and high ethical standards. Herriman’s mascot is the mustang and their school colors are blue, red and gold. They produce Mustang Television and have a few treasured traditions in Hearts of Gold, Senior Sunrise and community barbeque. They can be found on Facebook and Twitter at:


We look forward to spending time at Herriman and thank them for opening their doors to us.

We are excited to announce Vicki Davis (FB, @coolcatteacher) will be joining us as a keynote speaker for UCET 2015 (#ucet15), held April 2 and 3 at Herriman High School (@OfficialMustang).

“Vicki Davis  will help you teach with better results, lead with a positive impact and live with greater purpose.  If you want to know what 21st century teaching looks like, many including Thomas Friedman in the World is Flat and Don Tapscott in Grown Up Digital  mention Vicki as an example. The ISTE Online Learning Award,  pioneer in Open Source Virtual World Technology, and Edublog Award for the Best Teacher Blog are three of the many honors she has earned.”

“Vicki’s  two books: Reinventing Writing and Flattening Classrooms, Engaging Minds,  empower teachers to connect their students to technology and the world. The Cool Cat Teacher Blog, is consistently among the top 50 blogs in education worldwide. In 2013, Mashable named her one of “Twitter’s Top 10 Rockstar teachers.” She has created more than 20 global collaborative projects connecting students from more than 20 countries.”

“Vicki hosts the popular Internet radio show of best practices for busy teachers “Every Classroom Matters” on the BAM Radio network. She has shared her exciting story at more than 30 conference keynotes around the world and through webinars.  The Ignite Show named Vicki a “thought leader in residence.” Her articles appear in Edutopia, the Washington Post, the Atlantic and more.”

“Vicki is a Google Certified Teacher and Discovery S.T.A.R. Educator. She lives in Camilla, Georgia, teaches full time at Westwood Schools and is a wife and mother of three.” – http://www.coolcatteacher.com/bio