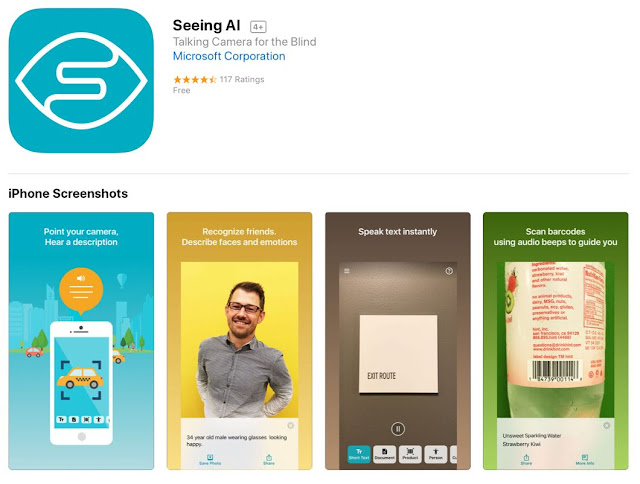 Seeing AI is a free app that narrates the world around you. Designed for the blind and low vision community, this ongoing research project harnesses the power of AI to open up the visual world and describe nearby people, text and objects.

Optimized for use with VoiceOver, the app enables you to recognize:
• Short Text – Speaks text as soon as it appears in front of the camera.
• Documents – Provides audio guidance to capture a printed page, and recognizes the text, along with its original formatting.
• Products – Scans barcodes, using audio beeps to guide you; hear the name, and package information when available. (works with iPhone 6 and later)
• People – Saves people’s faces so you can recognize them, and get an estimate of their age, gender, and emotions.
• Scenes (early preview) – Hear an overall description of the scene captured.
• Currency – Recognizes currency notes. (Requires iOS 11)
• Color – Identifies color.
• Handwriting – Reads handwritten text like in greeting cards
• Light – Generates an audible tone corresponding to the brightness in the surroundings.
• Images in other apps – Just tap “Share” and “Recognize with Seeing AI” to describe images from Mail, Photos, Twitter, and more.

Seeing AI is built to help you achieve more by leveraging the power of the cloud and artificial intelligence. As the research progresses, more channels may be added.

Recently honored with Helen Keller Achievement Awards from American Foundation for the Blind.

Questions, feedback or feature requests? Email us at seeingai@microsoft.com.