Free iOS App Today: Nice To Be Your Friend Synth

ONE DAY SALE: Nigel Tufnel Day, 11/11, NTBYF will be free! Also check out the sale pricing on MIDImorphosis and Apollo Remote Recorder!

Nice To Be Your Friend is the friendliest synthesizer app on iOS. There are two keyboards to play, with the top keyboard rotating around so that you can make music with a friend. What is played on one keyboard is highlighted on the other, so that you can share songs, and improvise new music.

The app is universal, and features more than one hundred sounds from an amazing SoundFont engine. The app is polyphonic and multi-timbral. Warm pianos, electric and acoustic bass, guitars, strings, and even synthesizer tones — a huge array of instruments, all at your fingertips in one app.

With full support for both MIDI input and output, you can use NTBYF to control other iOS synthesizers, or use a sequencer to trigger sounds from the app. There's even Audiobus support, allowing you to easily record your music, or to send the sounds through the wide range of filtering and effects apps.

The app also has an integrated Apollo MIDI over Bluetooth "A" endpoint, letting you send MIDI wirelessly between a pair of iOS devices, or between iOS and a Mac. This will require the Apollo app running on the other device — the Mac version of Apollo is free, so it's easy to try out. Once you've experienced the low latency of MIDI over Bluetooth, you'll never want to use WiFi MIDI again. Bluetooth LE is available only on the iPad mini, iPad 3 and newer, and the iPhone 4S and newer; this feature is not available on the iPad 1 or 2, and on earlier iPhones. 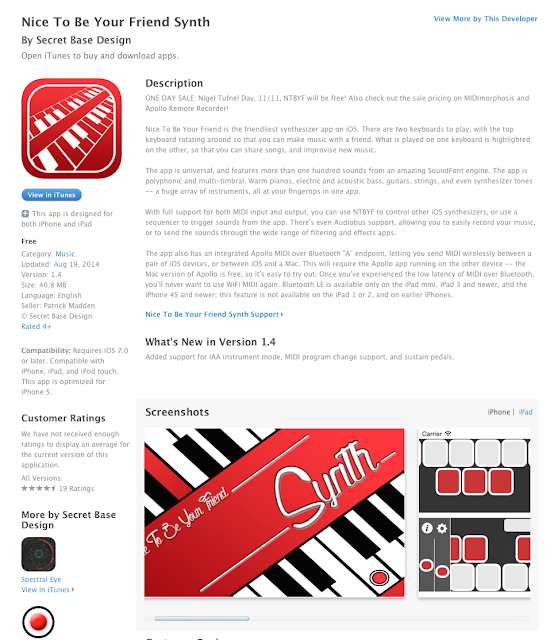